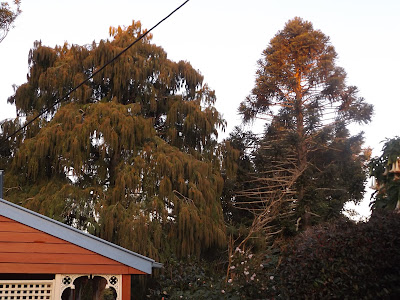 Weigela foliis purpueia         'Foliis Purpueis' is a small, spreading deciduous shrub with ovate, dull purplish-green leaves and clusters of funnel-shaped, rosy-pink flowers paler within      Stone Circle garden South East Corner with the other collected Weigelas
Forsythia viridissima, The flowers are produced in the early spring before the leaves, bright yellow with a deeply four-lobed flower, the petals joined only at the base. These become pendant in rainy weather thus shielding the reproductive parts.  The genus is named after William Forsyth (1737–1804), a Scottish botanist who was royal head gardener and a founding member of the Royal Horticultural Society     Embankment behind the Pool with newly collected Salvias   China
Fuchsia shrub “Shower of Stars”               East Border garden

Salvia cacaliifolia Blue Vine Sage Chiapas, Mexico, and in Guatemala and Honduras, at 1,500–2,500 m (4,921–8,202 ft) elevation. It has been available in the United Kingdom for many years, after being recognized by William Robinson in 1933 (Royal Blue)  Pool Embankment

Salvia microphylla  ‘Huntington Red’ is an evergreen plant, growing from 70cm to 1 meter and spreading from 60 to 75cm. It has a shrubby growth habit with many thin, but firm and upright stems. The striking dark coloured stems approach black in colour and show off the red flowers. The calyces are almost black          North West Corner garden

Lobelia laxiflora Mexican lobelia, Narrow leaf shrub , orange and yellow flowers. It is also considered poisonous. The plant contains alkaloids and other toxic oils that can cause vomiting, diarrhea or other problems if consumed. Introduced to Britain in 1825.    Mexico, South, Central, and North America as far north as Arizona in the United States Central Lawn and border garden near pool fence

Metrosideros collina “Spingfire” native to French Polynesia and the Cook islands. The species was first formally described by botanist Johann Reinhold Forster and his son Georg Forster in 1775. It was given the name Leptospermum collinum. Front Embankment/ House sign