A wet march after a Record dry February and new plantings.

Plants added end of March 2017
A record dry February 2017 has transformed to some wet days with over 200MM rain in the first 3 weeks of March. Days remain hot and humid and often cloudy with persisting showers. 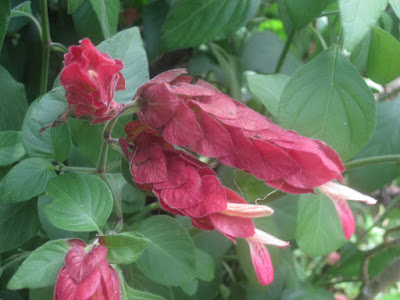 Justicia brandegeana Front Path garden
Mussaenda phillipica .Mussaenda ‘Queen Sirikit’ (Mussaenda ‘Dona Hilaria x Dona Aurora’) is named for Queen Consort of Thailand, the longest reigning head of state in the world. It is possibly the most widely grown Mussaenda in the world. It has multiple pale pink sepals which have a distinct darker edge. Flowers are bright yellow. Following heavy rain, the weight of the flower heads has been known to break branches. Mussaenda philippica (Tropical Dogwood) is native to the Philippines, Indonesia and New Guinea. The flowers have white sepals and orangy-yellow flowers. It grows in cultivation to a a shrub 1.8 to 2.5 metres (6 to 7 feet) high by 1.2 to 1.8 metres (4 to 6 feet) wide. This species is less widely seen than its well known cultivar Mussaenda philippica ‘Dona Aurora’ (Dona Aurora, Buddha’s Lamp). This was a chance sport first collected in 1915 by Calixto Mabesa on Mt Makiling and then recollected by Hugh Curran and Mamerto Sulit at the College of Forestry grounds at the University of the Philippines Los Banos in 1930. This cultivar has multiple floral sepals (often 5 per flower) instead of just one. This was propagated and dedicated in 1930 to Mrs Aurora Quezon, wife of the Philippines President. This plant is the parent of almost all hybrids. Criss Cross garden west border
Mussaenda phillipica  “Dona Luz” Mussaenda ‘Dona Luz’ (M. ‘Dona Hilaria x Dona Aurora’) is named after Philippines First lady Luz Banzon-Magsaysay. It has multiple shrimp pink sepals which are inclined to turn under at their tips. Criss Cross garden west border
Pseuderanthemum laxiflorum  ‘Purple Riot” shooting star. This is a well-branched herbaceous perennial to small shrub with opposite leaves and purple flowers held singly or in small groups near branch tips. This plant is native to Polynesia Fiji Islands   Central Shrub garden
Ipomoea horsfalliae Cardinal Creeper. This is a winter bloomer. The ruby red to magenta-violet flowers, 4 – 7 cm in diameter. Tropical vine is named for Charles Horsfall (1776-1846), an avid botanist who was Lord Mayor of Liverpool, and whose wife, Dorothy, was a noted botanical artist. This spectacular plant is a native of South America (Brazil, Guyana, Surinam and Venezuela), and has also become naturalized in the humid forests of the Caribbean, especially in Jamaica. It is also very common, and now naturalized, in Hawaii, where it was introduced by Prince Kuhio (1871-1922). In its native range the plant is almost solely fertilized by hummingbirds, and where these are lacking or scarce, fruiting seldom occurs. Most parts of the plant are poisonous if ingested. Arch East Border garden. SE Corner Car garage.
Bulbs
Sparaxis (Harlequin lower) Sparaxis tricolor has bright red flowers with yellow and black centres. Many named hybrid cultivars were bred from S. bulbifera and S. tricolor. endemic to Cape Province, South Africa. NW Corner garden
Narcissus jonquila (Jonquil) “Paperwhite” Jonquil: This term actually refers to a specific type of daffodil known as Narcissus jonquilla, although the name is often used as a more general term for daffodils in certain parts of the country. They are most easily identified by their dark green, tube-shaped leaves as compared to other types of daffodils which have flat leaves. Jonquils also tend to have clusters of several flowers, instead of just one bloom, along with a strong scent. NW corner garden 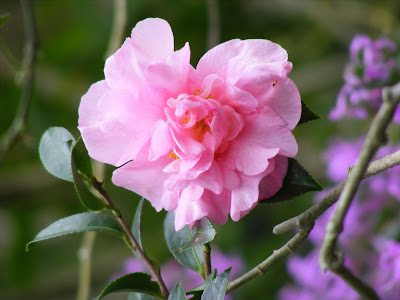 Camellia sasanqua "Hiryu" . Camellias starting to flower already here.
Freesia refracta alba Freesia alba is an herbaceous perennial growing from a corm and producing an erect, often branched stem up to 40 cm (16 in) centimeters tall with several leaves up to about 15 centimeters long. The inflorescence is a spike of several fragrant flowers with usually white tepals marked with yellow and purple. The genus Freesia is named after F.H.T. Freese (died 1876), a German physician from Kiel and a pupil of Ecklon. Freesia has a rather complicated and confusing history with lots of wrong names, misapplication of names and synonymy-for the full version see the 1982 revision by Peter Goldblatt. The first two species that were cultivated in Europe in 1766, were both placed in different genera viz. F. corymbosa was thought to be a Gladiolus and F. caryophyllacea was thought to be an Ixia. Freesia refracta arrived there in 1795 and was also thought to be a Gladiolus. Freesia sparrmannii was collected in 1770 and described in 1814, also as a Gladiolus, and the fifth species was called Gladiolus xanthospila but this one has never been related to any wild plant and is thought to be a form of F. caryophyllacea. Ecklon, Zeyher and Drege, all active in the early 1800s, sent back several species including F. sparrmannii, F. refracta, F. corymbosa, F. leichtlinii and F. andersoniae. It was only in 1866 that Freesia was described as a distinct genus. Freesia alba was first described in 1878 by G.L.Meyer, and became well known in Europe, as F. refracta var. alba. Gumbleton recognized Freesia alba as a distinct species in 1896. There is no record of how it got there, but Freesia alba first appeared in the English nursery trade in 1878 and quickly spread to Europe and North America. It appears to have caused quite a sensation, Cape province South Africa. NW corner garden

Allium sphaerocephalon “Drumsticks” Ornamental onions have small vibrant flower heads that change from green to a red-purple. Front path garden where hopefully they won't rot in present wet days.
Posted by "The Shambles" Montville garden at 9:35 PM No comments:

What is a garden?

Have people forgotten what a garden is ?
I imagine that in many cases some people would have no idea of the sensory delight of a full blown garden that relies on plants, design and maturity. I was really looking forward to the latest tv show about garden design but yet again there is so much focus on start from scratch creation of a designed space. Scary amounts of money are spent and major earth moving is often the norm.
Horses for courses .
People who visit our garden so often say they would like to have a garden like ours.A garden is never finished and even at 25 years in our care The Shambles will always be changing purely because plants grow, some die and we just get design ideas that will only make it more interesting.
It is the layers of maturity which is really only achievable by staying in one place and not selling up every couple of years.
I have been burnt in the past by people who ask for plants which I am always happy to give only to find out that they are selling the property just when things are taking off. Prorogation takes time and in the case of roses it is often by the second year that they are ready to plant out.
Often I am asked to visit a garden and to make suggestions of how to make it more manageable or to redesign it. It is so essential to get a good understanding of what the owner wants and their level of commitment because most gardens take work. It is also essential to value what is already in the garden and what past gardeners have done. The remnant plants will inform me of what grows well on the site. Taking note of the hard landscaping that has already been imposed on a site is also necessary and can either help or hinder a project. Rediscovering focal points and views or simply reducing tree branches can change the whole feeling of a garden letting in sunlight even into the interiors of the house.
I think that  some garden designers have lost the plot . I think that so many suburban gardens are being treated so heavily with hard landscaping and a very small range of plants that not even bees and butterflies will want to visit. I'm not sure but if the next housing estate held back on the concrete driveways and 6ft high fences and loosened up the planting maybe there could be somewhere for the kids to play .There is a difference between garden landscapers , garden designers and gardeners and if you want a garden that is one thing but if you want an outdoor room that is something quite different.
Kyleigh 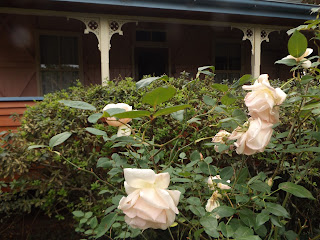 Posted by "The Shambles" Montville garden at 5:47 PM No comments: