Dead dry after a record hot dry winter and now failure of any spring rains. We have bought water for our tanks for the third time this season with no sign of relief. The pool has "split' it's fibreglass skin and requires repair for the first time in 20 years.

In spite of all this has a bus tour of 40 from Hervey Bay in the garden today and the maturity of the garden has safeguarded it from sever damage during this time. 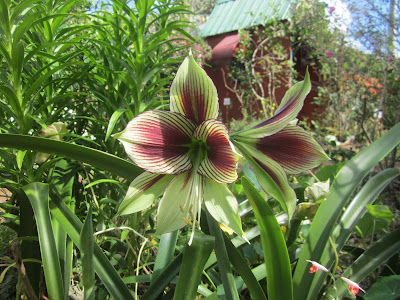 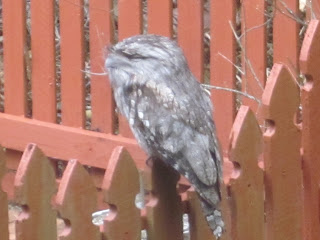 Metrosideros collina “Firecracker” Variegated or variable flowering plant in the family Myrtaceae. It is native to French Polynesia and the Cook islands. The species was first formally described by botanist Johann Reinhold Forster and his son Georg Forster in 1775. It was given the name Leptospermum collinum.

Althaea officinalis (marsh-mallow,[2] marsh mallow is a perennial species indigenous to Europe, Western Asia, and North Africa, which is used as a medicinal plant and ornamental plant. Pink single flowers on an erect branching structure. A confection made from the root since ancient Egyptian time evolved into today's marshmallow treat.  Central Shrub Garden 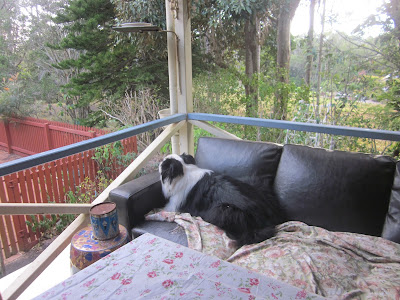 
Buddleja davidii 'Black Knight' has been one of the most successful davidii cultivars ever released. A selection made by Ruys at the Moerheim Nursery, Dedemsvaart, Netherlands, circa 1959, it was accorded the RHS Award of Garden Merit in 1993. Central Lawn and Border Garden.

Rosa banksiae alba, (Single White)  Lady Banks' rose,  Banks' rose, The rose is named for Lady Banks, the wife of the botanist Sir Joseph Banks. It is a species of spring flowering, native to central and western China, in the provinces of Gansu, Guizhou, Henan, Hubei, Jiangsu, Sichuan and Yunnan, at altitudes of 500–2,200 m. The species was introduced to Europe by William Kerr, who had been sent on a plant-hunting expedition by Sir Joseph Banks. He bought the first Lady Banks' Rose, subsequently named the white Lady Banks (R. banksiae var. banksiae) from the famous Fa Tee nursery in 1807