The Shambles May Visitors and New plantings an developments 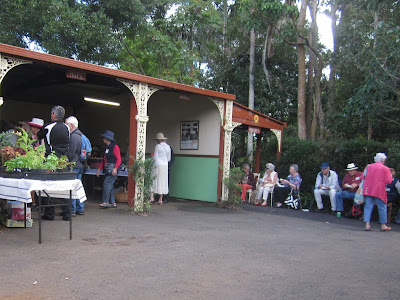 Through the garden admission tea and coffee and lant and book sales a generous amount was raised for frontier services (Longreach) Through the Montville uniting Church. 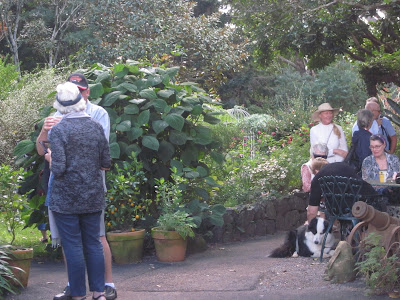 
Licuala ramsayii  ‘Australian Fan Palm’ A medium sized, single stemmed palm, usually up to 15 m in height, though it can reach 25 m. The stem is normally quite straight and slender and up to 20 cm in diameter. The crown consists of large fan-shaped leaves. The leaves up to 2 meters long, with feather-like fronds. Occurs in NEQ from about Cooktown, south to about Ingham. Altitudinal range from Cape Tribulation Queensland, near sea level to 1100 m. Occurs in rainforest, swamp forest, mangroves, littoral forest and in diverse riparian and riverine habitats, on various soil types. Licuala ramsayi (F. Muell.) was first described in 1874 as Livistona ramsayi by Ferdinand von Mueller. The new species was based on a collection made by Edward Pearson Ramsay from “Rockingham’s Bay,” which was a broad location name for the area around the coastal township of Cardwell and the mountainous Cardwell Ranges hinterland. Ramsay was a self taught naturalist with a special interest in ornithology. In 1876, he was appointed the first Australian-born curator of the Australian Museum. In the original publication of L. ramsayi there is no indication of when Ramsay


had made the collection at Rockingham Bay.


Schlefflera elegentissima syn. Plerandra elegantissima, syn. Dizygotheca elegantissima “False Aralia’ It is an evergreen shrub or tree. Its leaves are thin, coppery red to dark green with toothed edges. On adult plants the leaves are much broader. In autumn it bears clusters of pale green flowers followed by black fruit. John Gould Veitch collected Schlefflera syn Aralia elegantissima, which was first introduced to the world during the London ‘Great Spring Show’ of 1873. New Caledonia


Leea coccinea ‘ Hawaiian Holly’ . The Leea is a relative of the Fatsia. The burgundy Leea, also known as Hawaiian Holly, has bronzy red foliage. Leea's are a shrubby plant bearing large leaves with each leaf divided into numerous pointed leafletsThe genus was named by Linnaeus after James Lee, the Scottish nurseryman based in Hammersmith, London who introduced many new plant discoveries to England at the end of the 18th centuryGolden Fern (not identified). Burma


Transplanted 3 x Hymenocallis x harrisiana.’Sacred Lily of the Incas’. Hymenocallis harrisiana Herb. is a deciduous species from Mexico. The strap shaped leaves are glaucous, as it comes from an arid area. The flower has a small scented corona (crown). Each flower lasts only one night. The genus Hymenocallis was created by Richard Anthony Salisbury in 1812,[5] when he separated out a number of species formerly placed in Pancratium, starting with Hymenocallis littoralis. The main reason for the separation was that the fruits have only two seeds in each locule. Salisbury explained the name as referring to the "beautiful membrane which connects the filaments.


and weep creating a scrambling plant that is almost vine-like. 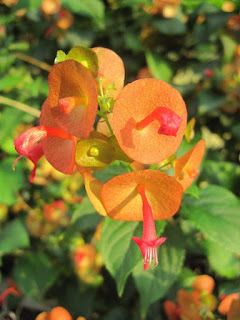 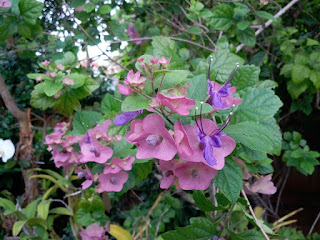 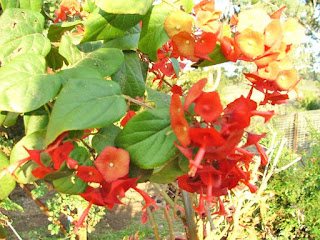 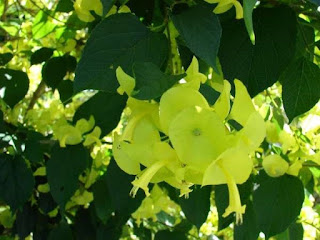 
Adjacent 2 mature Holmskioldia sanguinea (orange) see above. One of our mature plantings


Apium graveolens var. rapaceum Celeriac. Celeriac originating in the Mediterranean Basinis a variety of celery cultivated for its edible roots, hypocotyl, and shoots.


Mentha × piperita var. citrate  Eau-de-cologne mint. Mentha citrata has a strong lavender odor due to the two chemical constituents, linalyl acetate (45%) and linalool (45-50%), which makes up around 90% of the oil. The leaves and flowering plant have traditionally been claimed to have analgesic, antiseptic, antispasmodic, carminative, cholagogic, diaphoretic, and vasodilator properties. Like other members of the genus Mentha, it is best not used by pregnant women because large doses can cause miscarriage.


Hibiscus acetosella ‘Voodoo’ (Cranberry or African Rosemallow) Deeply cut crenate leaves which are dark maroon to a patchy red/green appearance. Solitary flowers vary in color and are most often the dark pink to maroon that is characteristic of the foliage with darker vein-like markings. H. acetosella first recognized in 1896 by French botanists as a distinct plant and given the name it currently has. The plant was probably first found growing around African villages in the southern Congo-Angola-Zambia region.


Zepheranthes citrina (Yellow Rain Lily) A species of bulbous perennial belong to the family Amaryllidaceae.  Zephyranthes citrina was described by Baker and published in Botanical Magazine 108: pl. 6605, in 1882 Mexico


Apium graveolens var. rapaceum Celeriac. Celeriac originating in the Mediterranean Basinis a variety of celery cultivated for its edible roots, hypocotyl, and shoots.


Cosmos atrosanguineus, (chocolate cosmos), is a species of Cosmos, native to Mexico, where it is extinct in the wild. The species was introduced into cultivation in 1902, where it survives as a single clone reproduced by vegetative propagation. Cosmos atrosanguineus is a herbaceous perennial plant growing to 40–60 cm tall, with a fleshy tuberous root. Dark maroon-brown flowers.


Short-lived perennial plant plant.The species is extremely variable in the colour and shape of the leaves. The leaves of the wild species may be somewhat variegated but this has been developed to an extreme degree in cultivated varieties, whose leaves may include one or more shades of green, white, cream, yellow, pink, red, maroon and dark purple. The species was first described by Carl Linnaeus in 1763, as Ocimum scutellarioides. The genus Ocimum is best known for Ocimum basilicum, sweet basil. The species was first introduced into Europe from Java in 1851 by a Dutch horticulturalist. At this time, there were few leaf colours and shapes. A wider variety was available by 1877, when the American William Bull offered seeds at 43 US cents each. However, by selecting for seed production, early flowering was inadvertently favoured, and leaf colour also declined in intensity. Coleus breeding revived in the early 1940s, and by the 1980s, the availability of an improved range of cultivars led to coleus becoming the tenth most important bedding crop in the US.  Plectranthus scutellarioides is native to India (including the Himalayas), Sri Lanka, China, Burma, Thailand, Laos, Vietnam, Malaysia, Indonesia and Australia 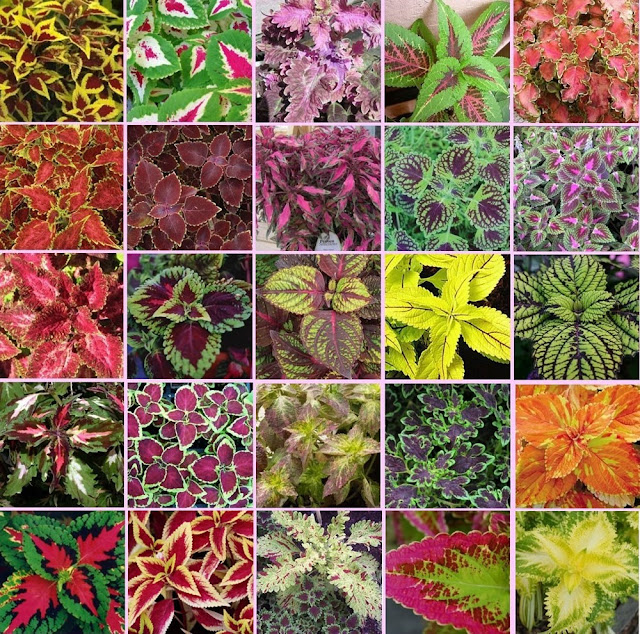 Posted by "The Shambles" Montville garden at 7:16 AM No comments: