For years we have grown a very happy successful rose with unknown parentage at "The Shambles"
an entry from our website (page on our Heritage Roses) www.montvillegarden.com
We have decided to adopt this rose, becuase of its qualities and will attempt to propagate and distribute cuttings grown specimens when we can


THE SHAMBLES ROSE (r.o.r) acquired as incorrectly named (and labelled) PINK CASCADE
Our rose resembles a China- Tea rose is robust, disease resistance and has beautiful short lasting deep pink single to semi-double flowers in clusters of 3 to 5. This rose flowers freely year around.
The bush , to about 1 meter height has few thorns. Flower stems are weak. It seems disease free and Low maintenance and very willing to propagate from cutting.
Original specimen from Mapleton Hardware nursery, stated that "Weeping Pink" was bred at a nursery on Mt Tambourine, parentage unknown,.
The rose grows in our Front Path Garden, South Rose garden, North Rose Garden, and Central Shrub garden.

The only candidates for the name "Pink Cascade" in the literature do not describe roses resembling "The Shambles" rose. 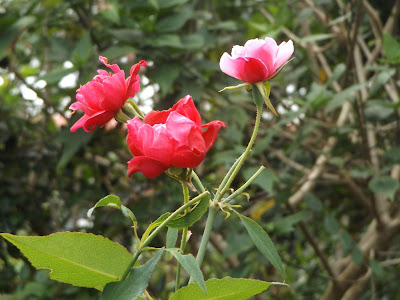 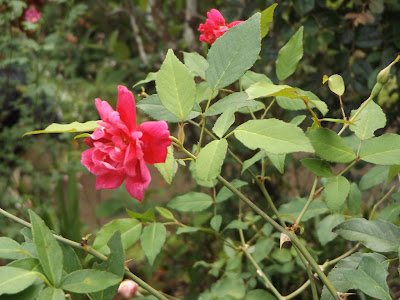 Posted by "The Shambles" Montville garden at 11:09 PM No comments:

Many Changes at "The Shambles" before Easter 2016

It seemed the right time.
A big Cocos Palm near the house and 3 large Privets (Ligustrum ovale) and a very large Ice Cream Bean tree (Inga edulis)  were removed from our North West Rainforest corner.  The palm was a big bloody nuisance and the sky has opened up in the North west corner bringing on a new project.

4 meters of large large pitching stone was brought into the NorthWest corner to compose a circle of stone and a central circle of stone reflecting somewhat the more formal rock work in the opposite corner (SE) of "The Shambles".  The paths will be gravelled and the rest of the understory areas of ferns, bromeliads, Deiffenbachia and other subtropical foliage plants are now rock edged. Going from the shade of the rainforest into the sun is quite successfully achieved. A borrowed background of a large variegated fig ? Ficus benjamina? lies to the west of this new area.
We mean to keep this area from being shaded by new trees. We ave already added Lomandra hystrix and intend to transplant Red Hot Poker Knifophia aloides for interest and Graptophyllum ilicifolim (Holly Fuchsia) for Hedging behind. 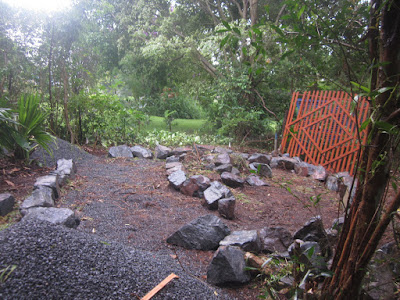 Assembling rocks and gravel at North West Corner "The Shambles"

Our once fowl house and then mower shed was moved after 20 years and now sits close to the north boundary behind the "Plough Inn". Old wire was taken away with posts etc. This gives a lovely open aspect which takes in the trunks (and in season) the autumn foliage of our old Persimmon trees.
The former crossing paths of our "Criss Cross"  garden is now a five ways also connecting to the western side of "Fenced Rose garden"
Kyleigh found an interesting plant , a variegated Stobilanthes anisophyllus var 'Chameleon' to add to he "Criss Cross Fiveways. 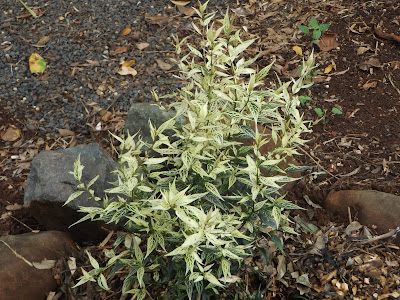 Strobilanthes anisophyllus "Chameleon"
The site where the Cocos Palm was removed is right outside a large picture window in our main room. Thinking and planning is required here.


Posted by "The Shambles" Montville garden at 10:47 PM No comments: