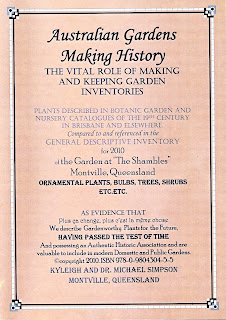 There are many reasons why trying to launch and promote a book ,which has been such a personal project, is such a drag. Although a lot of thought and effort went into "Australian Gardens Making History, the Vital Role of Making and Keeping Garden Inventories" I realise that very few people seem to care about this issue.

Most people don't mind visiting a well prepared private or public garden. Some folk will actually have a garden which they spend some time improving. A few souls collect plants and spend time understanding more about their collection. Very few have an important garden, a garden with a documented history or plan to restore and record a garden.

Most garden visitors will look at a garden as an entity, from a distance, only noting particular plants as they contribute to the overall picture. Some visitors will take the time to seek out and appreciate particular plants which are familiar favourites or which are coveted curiosities. Very few will understand or appreciate that cataloguing the garden from each bulb and groundcover to the largest tree is vital to the record of the gardens existance and value.

With all that in mind we have been working on the garden at "The Shambles" for 20 years and at least for the last 10 I have been keeping an inventory which has grown in size and scope as I have tried to make it inclusive.
My original motivation was to record the successes and failures among plant species, to map the garden to assist with maintenance and also satisfy my own curiosity using the inventory as an entry to research in garden books, magazines and nursery catalogues.
The catalogue of our own garden has been published 5 times. Once each in different formats in "The Shambles, the Story of a Montville Garden", "Over the Fence and Overlooked, Traditional Plants in Queensland's Gardening Heritage" and finally in "Australian Gardens Making History, the Vital Role of Making and Keeping Garden Inventories". Most unusually our DVD, "A Garden in the Rain, 'The Shambles' at Montville" contains many labelled images and documents the garden in another way. Lastly our garden inventory is published and updated in our website www.montvillegarden.com

As members of 'Heritage Roses in Australia' and the 'Australian Garden History Society' we felt that the latest book "Australian Gardens Making History" contributes another unique element to the study and appreciation of Australian Gardens. There are precious few references for Queensland gardeners but for 'Subtropical Gardening' magazine which is one of the best available. As for gardening books and Queensland's gardening Heritage it's as though there was no Australia north of the Tweed. In this book we have attempted also to verify the bona fides of the "heritage" credentials of many common garden plants by comparing the modern catalogue to 19th century Queensland and other sources. Accordingly for example we note that many 'old fashioned' colourful ornamentals in our garden are found in the 1875 and 1885 Brisbane Botanical Garden Catalogue as well as in earlier nursery catalogues such as Guilfoyles 1851 Sydney Catalogue and others.
From this research it would appear that from the earliest days Queensland gardens could contain the widest variety of colourful and exotic plants collected in a far more adventurous spirit than today. The genetic material from surviving gardens is also a precious resource.

So what you may say! Well as members of the Garden History Society and having regard for the ICOMOS (International Charter for the Conservation and Restoration of Monuments and Sites) Charter adopted by Australia on 19th August 1979 at Burra Burra (Burra Charter) articles 23, 24 and 25 refer to the necessary study, documentation and publication of an historic site so that conservation/ restoration can take place. We contend that the inventory of a garden is just such research material together with supporting plans, photographs and documents. We go further to say that it is the lack of any well publicized record which has made it so easy to sweep aside Queensland historic gardens and landscapes.
In order to give future researchers valuable material we would propose that existing public and private gardens should have inventories, plans and photographs collated and published in as many formats as possible.
Hopefully those who attend our book launch we see it the same way.
And so, at the "Australian Garden History Society" event 11a.m., 17th April 2011, at the Noosa Botanic Gardens, Lake McDonald Drive, Cooroy we will put the case and hope that some of the attendees will buy and enjoy the book ($15) and bonus DVD. Maybe it will start a discussion about the importance of recording and publishing the inventories of Queensland's Historic gardens.
Dr Michael Simpson
Posted by "The Shambles" Montville garden at 6:25 PM No comments:

Gardening in autumn, but still a humid and wet 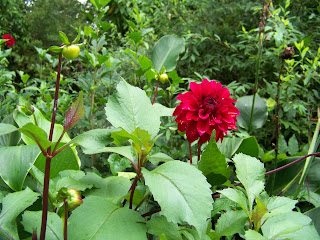 Dear Reader,
There has been so much else going on with work and family that we have only yesterday but in a big day trying to win back our garden from the rampant summer growth.
The big hedge of Duranta repens at the front with it's vicious thorns has been semi civilized with the help of our friends Tracey and Chris. Two truck loads of material went to the 'green waste' tip but this hedge is still 4-5 meters high. The side hedge of small leaf privet Ligustrum spp has been pushed back. Thank heaven for tall friends and mechanical hedge trimmers and chain saws.
Some big shrubs have been heavily reduced including Buckinghamia celcissima, Euphorbia (poincettia) and Dombeya tileaceous as they were assuming tree like proportions.
The hedge trimmer came in handy to attack and reduce Grewia occidentalis, Loropetalum chinense, Holmskiodia sanguinia (purple mandarin) and a 2 meter mixed hedge of Syzygium australe. Reducing this latter hedge allows the very tall Michelia doltsopa 'silver cloud' to show off.
Reducing some branches of a large Gordonia axillaris has restored some sight-lines from the house verandah.
The unceasing rainy or showery weather has made a mess of our attempts to sow seed but luckily our soil drains well. Mysteriously a large Rhododendron vireya is dying while a beaut Viburnum macrocephalum is happily flowering next to it.
Weed growth is prolific and our pile of green trimmings are reaching Everest proportions. These 'mulch' pile to break down to produce sweet compost which we encourage with blood and bone and lime over the heaps .
Coming into flower or bud are Camellias both sesanqua and japonica, Tea and China roses, all manner of salvia and the beautiful Lepachina salviae. Plectranthus ecklonii (blue, white and pink), Plectranthus saccatus and the various Plectranthus hybrids such as 'Mona lavender' are flowering freely as is the fairly invasive red flowering Ruellia graezecans. The beautiful pendulous pink bells of Strobilanthes cusia create a cloud of delicate colour while the hanging lanterns of Abutilon pictum, Abutilon megapotamincum and Abutilon hybridum (such as double pink) flower irrepressibly.
Problems: some slightly greasy paths due to mould and moss, delicate flowers such as some roses blown to bits and rampant growth which threatens to overwhelm some areas of the garden. Also there is the continuous battle in weed infestation with tropical chickweed, Tradescantia alba and prolific seedlings of Tabebuia chrysotrica and Inga edulis which have deep tap roots.
To balance all of this are the continuous surpises in this garden e.g. the beautiful unidentified pencil orchid (?Dendrobium) flowering ridiculously on one of our front fence palings; the wind bourne new staghorn and birds nest ferns popping up on surfaces and even scultures around the place.
New plantings Eucomis (very dark leaved var Pineapple lily), Hibiscus mutablis (single crimson var), Hydrangia macrophylla variegata and a variegated Pandorea jasminoides.
After 5 months of wet weather we are hoping for some opportunitys to sit outside and perhaps light a campfire.
Kyleigh and Michael Simpson

Posted by "The Shambles" Montville garden at 4:34 PM No comments: