The Shambles and plant collecting, acquisitions keeps on keeping on 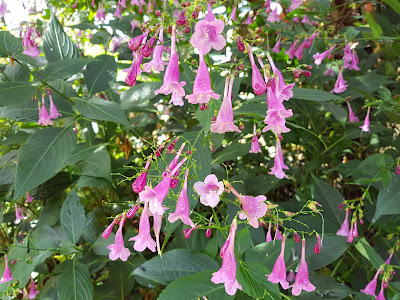 These acquisitions listed below are in fact potted up and waiting for spring. It hasn't been a bad winter. There has been intermittent rain and it's only just now dipping down in temperature

The following Fuchsia and Salvias are waiting along with Abelia floribunda, Weigela purpurea and Forsythia , all in pots for a chance in spring. God know where they will fit
Fuchsia shrub “Shower of Stars”

Salvia cacaliifolia Blue Vine Sage Chiapas, Mexico, and in Guatemala and Honduras, at 1,500–2,500 m (4,921–8,202 ft) elevation. It has been available in the United Kingdom for many years, after being recognized by William Robinson in 1933 (Royal Blue)

Salvia microphylla  ‘Huntington Red’ is an evergreen plant, growing from 70cm to 1 meter and spreading from 60 to 75cm. It has a shrubby growth habit with many thin, but firm and upright stems. The striking dark coloured stems approach black in colour and show off the red flowers. The calyces are almost black

Salvia radula         white flowering Salvia radula is also called Scrappy African Sage and is native to the botanically rich mountain regions of South Africa and grows at elevations from 1300 to 1900 meters. South Africa
Posted by "The Shambles" Montville garden at 6:22 AM No comments: