Easter in the Garden, Rare and unusual plants for sale 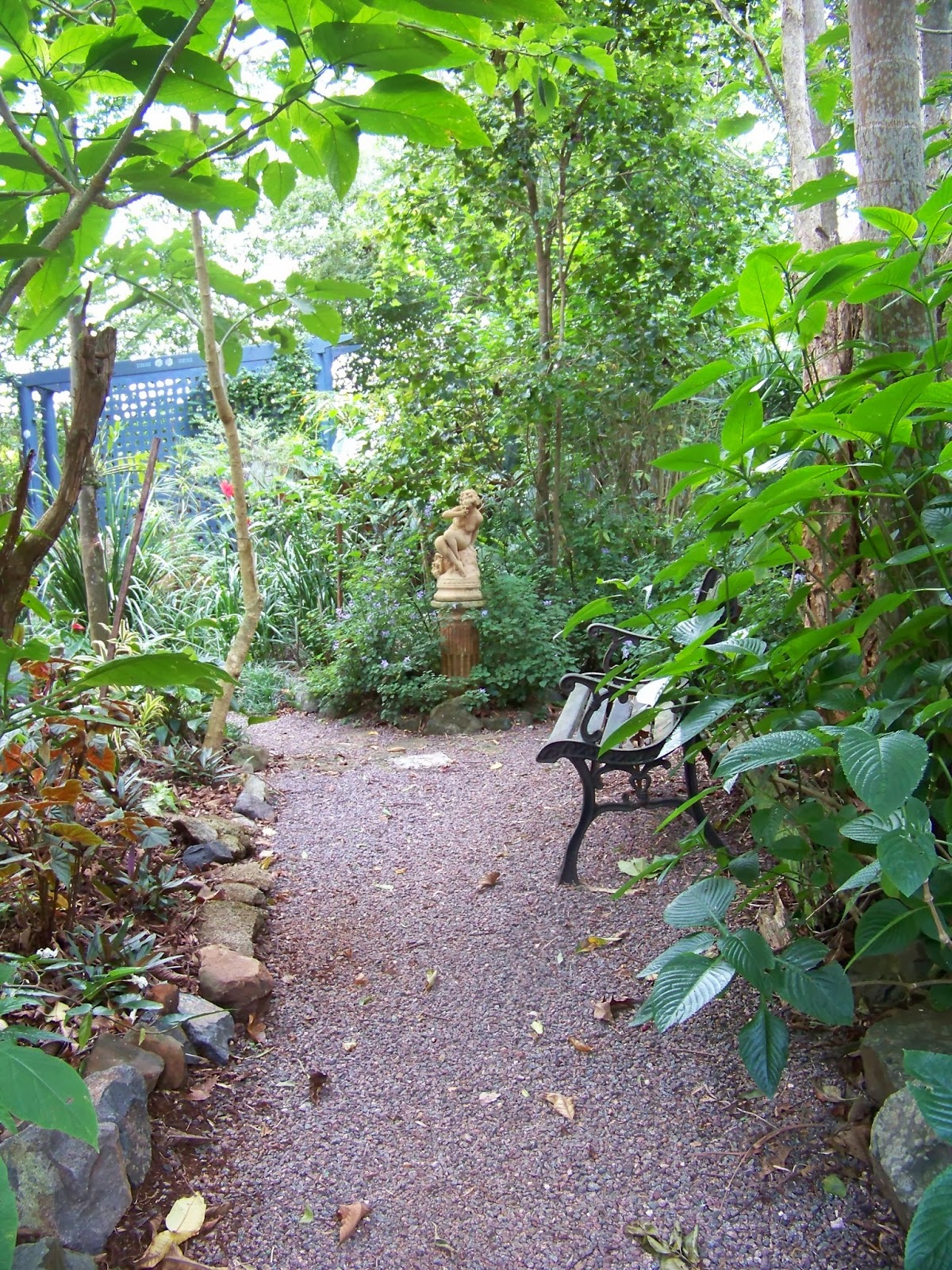 Lush Garden Paths to explore at "The Shambles"

"Easter in the Garden" will not only be a chance for visitors to see many interesting and unusual plants in the garden at "The Shambles" but will also be a chance for some to buy new varieties.

The Hunchy Community Association has put together a large collection of perennials, shrubs, vines for the Giant Plant Stall. Many favourites such as the Salvias of all sorts will be available as well as Heritage Roses , grown from cutting, including of course the popular 'Montville Rose" a tea rose known as Duchesse de Brabant but probably more accurately is Comtesse de Labarthe.

Refreshments will be provided by the Blackall Range Horseless Carriage Club

In the Mean time we continue to collect and record in our plant inventory new genus, species and varieties, even when space is now at a premium. There are literally thousands of plants collected at "The Shambles" from hundreds of different genus. The following is our latest list of those arrived and planted, or those ordered, or perhaps waiting for planting. It's a busy garden out there.

Amorphopallus bulbifer  This pops up in summer but we haven't taken much time to study it.

Amorphophallus (from Ancient Greek amorphos, "without form, misshapen" + phallos, "penis", referring to the shape of the prominent spadix) is a large genus of some 170 tropical and subtropical tuberous herbaceous plants from the Arum family (Araceae).
These are typical lowland plants, growing in the tropical and subtropical zones of the paleotropics, from West Africa to the Pacific Islands. None of them are found in the Americas although a remarkably similar but not closely related genus, Dracontium, has evolved there. Most species are endemic. They grow preferentially on disturbed grounds, such as secondary forests.
These small to massive plants grow from a subterranean tuber. From the top of this tuber a single leaf, is produced atop a trunk like petiole followed, on maturity, by a single inflorescence. This leaf consists of a vertical leaf stalk and a horizontal blade, which may consist of a number of small leaflets. The leaf lasts one growing season. The peduncle (the primary flower stalk) can be long or short. Orchid Walk, Blue trellis garden

This evergreen shrub flowers from Spring to Autumn. Beautiful clumps of long tubular flowers. Full sun to part shade. Height 1m. Width 1- 1.5m. Frost tolerant. Drought hardy. Being reordered from 'The White House' Nursery Victoria. What had been sold to us as A.floribunda in the past turned out to be a Deutzia

A large evergreen shrub or small tree. Beautiful large flowers from Summer through to Autumn. Full sun to part shade. Frost tolerant and drought hardy. Height 4m. Width 3m.   The flowers are huge and will weigh down the branches, and an attractive feature is the combination of single as well as double flowers on the same panicle. Some years it can be one or the other, but mostly is a combination of both.  Buddleja colvilei is endemic to the eastern Himalaya; discovered by Hooker in 1849, he declared it 'the handsomest of all Himalayan shrubs'

This lovely shrub flowers in Spring. Pink flowering Full sun to Part shade. Deciduous Height 1.5m. Width 1m. Frost tolerant The deutzias are fairly new to gardens: the exception, D. scabra, was noticed in Japanese gardens by Engelbert Kaempfer (1712) and Carl Peter Thunberg (1784) but not actually seen in Europe till the 1830s; two-thirds of the species noted in the R.H.S. Dictionary were gathered in from the wild during the 20th century. Central Shrub Garden

Elaecarpus bancroftii Ebony Heart. Small tree from Johnston River, with elegant pendulous white flowers. The fruit is eaten by Cassowarys in the trees normal range. We may use this to replace the Tabebuia chrysotricha given the latters bad habits. Australia

This is a lovely evergreen shrub. It flowers in Spring through to the end of Autumn. It requires shelter from frost. Sun or Shade. Height 2m. Width 1m.

ochroma fushiodes is a medium, evergreen shrub that flowers in Spring, Summer and Autumn. It has salmon orange tubular flowers in pendular clusters. Can also be pruned to shape as a specimen shrub at the back of a perennial border, or container grown Height 3 - 3.5m Width 3m. Frost tolerant to -2. Then it needs protection. Drought hardy.

Iochroma warscewiczii is a medium, evergreen shrub that flowers in Spring, Summer and Autumn. It has light purple funnel shaped flowers, 8 - 10cm long in pendular clusters. Can also be pruned to shape as a specimen shrub at the back of a perennial border, or container grown Height 3 - 3.5m Width 3m. Frost tolerant to -2. Then it needs protection. Drought hardy.

Luculia is a small genus of flowering plants in the family Rubiaceae. It presents as a shrub or small tree. The plant has large leaves from 20-35cm with prominent veins carried in opposite pairs and with a terminal of an umbel or corymb of tubular/open ended white, pink or creamy flowers with 5 spreading petals. The floral terminal may be from 10-20cm, depending on the species.
Commonly known as white luculia, this shrub grows to a height of 2m with a spread of 1.5m. This summer flowering variety has the most gorgeous perfume. Plants require full sun to part shade. During the winter, frost turns the leaves of this plant to a red copper colour. Frost tolerant.

This wonderful small shrub has lime green oval shaped leaves. In Spring, it grows upright sprays of single white, outward bell sprays of flowers with a pink eye in the centre. Each flower is about 3cm in diameter. The flowering shrub has a lovely orange blossom fragrance; hence the common name 'mock orange'. The foliage then turns yellow in Autumn and then falls off. Winter dormant.Height 1.5 - 2m. Width 1 - 1.5m. Full sun/ part shade.

Physocarpus opulifolius  referred to as Ninebark or Atlantic ninebark, is a species of flowering plant in the rose family Rosaceae, native to eastern North America. Don't get it confused with Hydrangea radiata, which is also sometimes called ninebark for the ragged peeling of its bark.

A deciduous shrub. Beautiful lime green foliage with clusters of tiny pink flowers in spring. A wonderful small shrub for those areas that are to tough to grow anything. Height to 1.5m. Width to 1m. Full sun to part shade. Frost and drought tolerant Japan Central Shrub garden
Posted by "The Shambles" Montville garden at 10:27 PM No comments: