I really enjoyed the morning with the latest group visiting the garden despite the rain. Luckily there were many gardeners among the group who came prepared to walk around  and get a bit wet.Having a group of about 20 allows me to talk to people more and many people went away with cuttings to try at home.
I also learn a lot about the people who visit and hear plenty of stories about old cars when people come across the little Fords in the garage. One lady was so delighted to see the Abutilons or Chinese lanterns because they reminded her of her mother which just shows how evocative a single plant can be.
Thanks to Jan and Chris my friends from the Obi Valley who came up and prepared the delicious morning tea.My Mum's home cooking also was a hit with her monte carlos , honey jumbles and date loaf on offer along with the freshly baked scones.
When people come to visit The Shambles , I hope that they can feel relaxed and unhurried as they explore the pathways and look at the plants.I always say that when you come to our garden it is not a "show " place,it has weeds and it is often changing .I do my best to make the garden look good if visitors are on the way and often it looks it's best when only the family are here to see it.
Lately we have been improving the nursery area and have had a wall and windows constructed on the car garage that greatly improves the view from the garden.
I have been sowing lots of seeds in among my plants where there are potentially sunny spots. A variety of vegetables are in pots , the sweet peas are in and all that is needed is some lovely Autumn weather to get them growing. 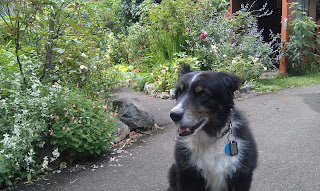 The best thing about our garden is that there is always something new to see. If not in the planting there will often be some new art work or construction. I have just been given several boxes of tiles and plan to create some mosaics for the garden over winter.
Here is Cooper waiting to welcome the visitors or maybe just thinking about the scones.
Happy gardening
Kyleigh

Posted by "The Shambles" Montville garden at 6:14 PM No comments:

My usual work wear and everyday clothing consists mainly of jeans,shorts  and Indian shirts. I love those comfortable  cotton shirts and the way they soften and age. The ones I wear out in public get old and become my gardening shirts until they wear out completely.My yard clothes can be a bit of a disgrace with shirts with two buttons, torn seams and paint splatters. I get a lot of wear out of them before they finally end up as rags or straight to the bin. Sometimes I catch at look at what I have on and then I think,who cares?
I was ironing one of the 'going out' ones( I never iron yard clothes and am not a good ironer at the best of times)and I was looking closely at the paisley print. I love that stuff . It is so detailed and organic. Apparently these droplet shaped patterns were of Persian and Indian origin. The shapes  also known as Persian pickles and Welsh Pears and have been uses since 1888.(My source is wikipedia so it may be complete rubbish)

Speaking of not dressing up to work. I sometimes go on one of the great walks from Baroon Pocket Dam to Kondallila Falls or one of the others and I tend to just wear the gardening clothes . The walks are not so far that I need to take water and as I walk quickly I don't intend to stop along the way.
What amazes me is just how over prepared some people are to go for a walk. They carry water which is ok but the outdoor outfits and equipment is sometimes quite staggering. One particular young man had a full piece coloured suit laden with zips and pockets , nifty backpack ,water  sipper pack  and solid  lace up hiking boots and while I was standing at the side of the track catching my breath in thin shirt and shorts ,worn out runners and mouldy hat ,he could have been in the catalogue for aKathmandu sale. I can only hope that he was trying his stuff out for a big trek in the Andes and not just making his way to Mapleton Falls.
Here's to fast walking
Kyleigh

Posted by "The Shambles" Montville garden at 5:02 PM No comments: 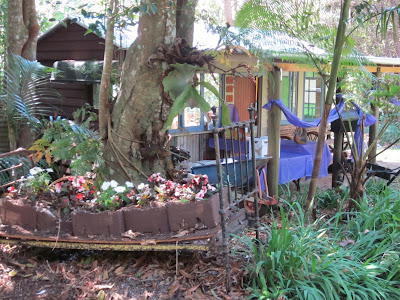 The Plough Inn, Michaels Man Shed
As those of you who attended the grand opening of the Plough Inn at the Shambles you will recall that I lamented that Kevin from Grand Designs could not be there but he would have been impressed if he had!
The whole project came in on budget, we had no difficulty with the contractors, we used heaps of recycled materials and we even had a baby due in the family which seems to happpen when ever Kevin visits a Grand Design build.
Now we have been watching Kevin's Man Shed on television and all I can say is  "Been there done that".
I know it is all about TV but really Llamas! About the only thing comparable between Michael's Shed and Kevin's is the sodden ground at the moment. We didn't make our own glass and were not drawn to the idea of  using methane gas.  We also do not happen to have any Aircraft demo yards nearby for the ultimate spa but in the end the shed experience amounts to the same thing.
I actually think lots of men have a need to find their inner cave and that it is done by constructing a cubby and hiding away .
It is that amazing place of rest and relaxation according to  Michael  who sits down there with a bottle of wine in candle light.  I actually believe that he is just coming up with more ideas or jobs  for me to work on. Sometimes he even lets visitors down there for evenings of refreshments and conversation especially the people who helped to create the Plough Inn's unique style.
We like the old Kevin have had our ups and downs along the way but it was about finding the joy in small achievements.The making  process of the shed remains as important as having a finished building .
So far Michael has not had any ideas about getting a dressing gown to wear down there but if he does I'll  pick one up at the op shop.
I also like the way people have taken the whole concept of the Plough Inn on and that we get gifted pictures (The Mona Lisa) and adornments to hang up down there. We even have the gift of a wood stove from Warren and Lisa  that will be the next thing to install.
That will  just give us another excuse to have a Shed warming celebration.

Posted by "The Shambles" Montville garden at 4:36 PM No comments: