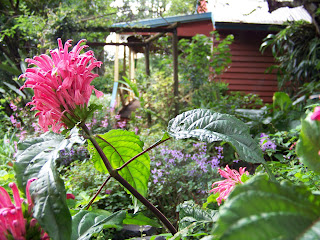 The first of January 2011 and here at Montville the heavy rain continues as it has since october. We have had a couple of fine days to be fair. Tragically many significant towns and smaller communities have been devastated by record flooding which has been a feature of the Christmas New Year period, after years of drought.

Justicia carnea in a wet garden.

So far our own home and our own family elsewhere has been spared any damage but all of us are concerned for residents at Chinchilla, Condamine, Dalby, Emerald, Theodore, Bundaberg and Rockhampton and all surrounding centres as they wait to be able to clean up and recover.
As for ourselves in the continuing deluge, mouldy shoes and a touch of "cabin fever" , a wet dog and a damp, dark little house will be our pattern as we look at our garden through the window.....probably until March.
Let us hope for better times for the residents of the Darling Downs and central Queensland in days to come.
Michael Simpson
Posted by "The Shambles" Montville garden at 9:45 PM No comments: 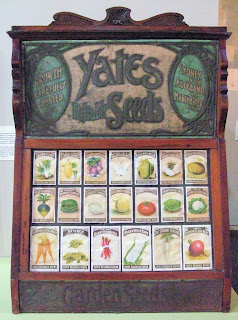 Well it has been raining consistently for the last 48 hours and Montville has decended into thick fog and looks beautiful. I love the soft colours and it is the upside of walking the stir crazy dog on a wet Sunday afternoon.
As usual we have projects on the go indoors but sometimes it is hard to keep motivated when the rain doesn't let up (for months) and inside seems dank too.
I am making a Christmas present for Michael . It is a seed shelf and is based on the old fashioned Yates seed displays that were once in shops.It is looking good and will be very colourful once the seed packets are in place.I have also finished another childrens book and have only a couple of pages left to do on the last one.
Michael has been preparing for his next book and also has painted up a nativity scene for the front gate, after the style of Giotto, but in cheap Chinese acrylics.
As for the garden,we were fortunate to have a sunny morning on Friday and the sound of mowers and chain saws rang around the district. Michael managed to spray some Triforine and Glyphosate. I find that every time I walk outside I see things I want to do. Pathways are blocked by drippy branches and some paths are getting very mossy but it is nothing that can't be tackled when the weather fines up.
Lots of things in flower, Brugmansia candida (lutea, versicolor and alba) look beautiful as does Iochroma cyaneum. All the old fashioned roses are flowering but being bashed up by the rain. The mysteriously disappearing Impatiens and Cleome hassleriana have reappeared here and there and I hop that they self seed backinto prominence. As usual Salvias (S.confertifolia, S.iodanthe, S.macrophylla, S.madrense, S.coccinea (white, red and discolor), S.uliginosa, S.splendens (all sorts) and S.involucrata) all prosperous and flowering as is Philadelphus coronarius.
Kyleigh
Posted by "The Shambles" Montville garden at 12:11 AM No comments:

For anyone who has visited our garden over the years they will know that we have stuggled with grassy path ways.Either it has been drought and too dry to get grass started or it has been wet and muddy. The fact of the matter is that we like trees and like a shady garden and most of the original grass prefers sun. We are also very thrifty and have not wanted to spend money on turf.
But in our usual style we have stumbled upon a solution. Our brother in law Ian who has experience with golf courses suggested we purchase a small amount of turf (Sir Walter)and cut it into squares and plant these so they will eventually send runners out and this worked well. We also were given a few pots of( Sweet smother) by Ron Treloar and this has been successful too.
The main issue has been that when large numbers of visitors walk around the garden areas of grass do get thin.Our solution has been to barrow small sized gravel as paths on the most used patches. Now there is grass growing through and over the gravel and we are back to lawn in most areas that can be mowed.The gravel seems to have enhanced the growth of the grass and it feels firmer under foot. I think that it would be a good idea in any garden to start with a gravel base on the pathways as I think it gives the grass some protection in the early stages and perhaps the texture of the gravel helps to scouer the soil and make it more friable for the young roots. Kyleigh
Posted by "The Shambles" Montville garden at 3:53 PM No comments: 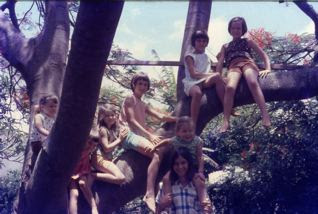 As always I am thinking about gardening and forever evaluating gardens that I see and that includes the public spaces. As we left Brisbane nearly 20 years ago it continues to be a bit of a shock to see how it has changed and how the hard landscaping of parks and walk ways has reduced all the delightful soft edges.The low maintenance landscaping approach to parks where large areas of concrete are strategically laid out, repetitive plantings are in designated areas and teamed with the ubiquitious street art has been taken to the extreme. In fact there now seems to be very few untouched park spaces that haven't had this treatment. Every park seems to have a monumental playground of colourful tubular steel and plastic and these more often than not require a man made shade where a tree has been removed. Do the adults who design these playgrounds assume that children are incapeable of entertaining themselves in a more natural setting?
I recently was lamenting this fact with Maurice Wilson at the Garden History dinner and we identified Moora Park in Shorncliffe as a case in point. It now has a very elaborate and large playground down at the beach and while it is interesting and well used it has significantly blocked access and changed the site.
As a child I played in the sand and swam in the shark proofed enclosure. Hours were spent climbing the cotton trees, playing on the cliffs and walking along the groins and the pier. By always offering up a ready made play environment to children we may just be reducing the opportunities for them to use their imaginations and to be closer to nature.
Up until this "park scaping"you would go to Moora Park ,to be at the beach and it really didn't need anything else.Who thought that it was a good idea to improve on nature?
As for soft edges and soft landings there is nothing like grass to walk,run and play on and I really hope that more grassy areas are saved. The City Hall landscaping proves that you can take a functioning place where people used to sit and turn it into a hostile no mans land where people are effectively discouraged from being there.
In my opinion the city council should go a step further and rip up the Queens Street Mall and put back the road. This would reduce the places for people to linger and free up the flow of traffic too.
The Queens Street Mall and others in capital cities around Australia tend to follow the same formula of paving, small garden features,a few trees and the occassional kiosk. They are not welcoming places,rapidly become run down and degenerate and do not work well.
On the positive side I do like the Roma Street Parklands and the old Botanical Gardens and elements of sub tropical plantings could easily be echoed in the city square. We have an ideal climate in Queensland to introduce a lot of colourful ,hardy plants to the street scapes and with less emphasis on paved walkways could have a softer Brisbane.
Kyleigh
Posted by "The Shambles" Montville garden at 1:32 AM 1 comment: