Meeting people in the garden

It was lovely to talk to the visitors in the garden yesterday and very fortunate that it wasn't today as it has been rainy and cool.It certainly was a very relaxed opening for us and I am pleased that people were interested in the garden and ready to go home and work in their own gardens which is the whole idea.
Unexpectedly we had friends arrive and stay on for dinner . Luckily we have the "Lazy Rabbit' nearby so we could buy a delicious Japanese take away. 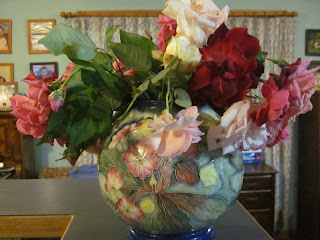 This afternoon I have been out picking roses for the house before they get too sodden.
Posted by "The Shambles" Montville garden at 1:52 AM No comments:

For years we have opened our garden according to a date on the calendar and often it isn't the best time . When trying to prepare a long term lead up for a garden to be ready for the public so many things come into play . The weather for a start  along with preparing plants to sell and coordinating refreshments and willing helpers . This weekend is a no frills version of an open garden and it will probably feel a bit more laid back and less frantic than the more organised opening. The preparation for this weekend began just a couple of days ago and has included nothing more than a couple of flyers, a mention on face book and word of mouth.  It doesn't matter if 5 people come along or 50. The garden itself has had a huge boost from mother nature and loads of attention from me as usual. I really love my garden and both Michael and I get great satisfaction from it as it continues to mature . We know that you have to be here all the time to really appreciate the subtle changes and the growth of plants. It can be something as transient as the fog that gives the garden a magical appearance. We are opening and sharing the garden this Saturday afternoon purely because it is looking lovely at the moment and there are several shrubs in full flower and a few areas in progress to look at.
This garden is not a show garden, it has weeds and doesn't stay inside the edges . It is a robust place where our family and friends get together and where children and dogs play . Honestly some people just go over the top with garden neatness & their outdoor eating preparation. Our kids had "picnics" that consisted of a brisk walk at the falls followed by a a drink of water and an apple. Here we have  the remnants of an impromptu  feast down the back yard. Everything tastes better outdoors! Feel free to bring along your own afternoon tea or special beverage on Saturday. We once gave a bus load of visitors a glass of wine  each and they staggered out at the end  with high praise and a smile on their faces.  Kyleigh 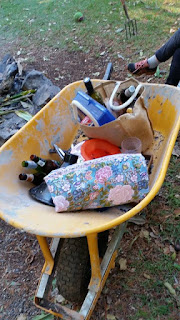 Posted by "The Shambles" Montville garden at 12:21 AM No comments:

Just remember please,  "The Shambles" is open this weekend 11th November 2017 from 2pm to 5pm to take advantage of the dranmatic response to our recent rain and good weather. 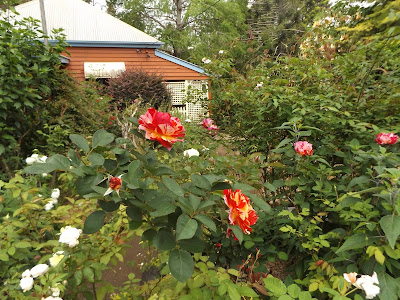 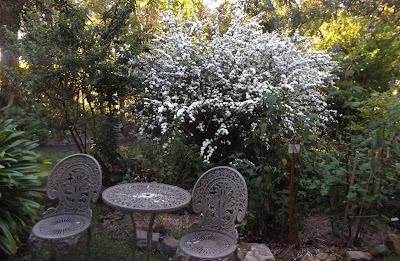 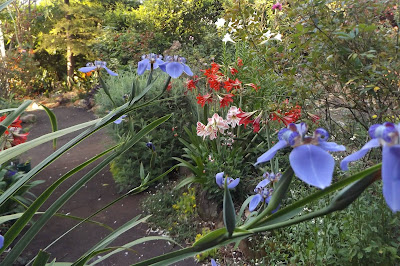 Coffee arabica is originally from Yemen on the Arabian peninsula, Arabica is thought to be the first species of coffee to be cultivated and many consider it to be a superior coffee type.The earliest credible evidence of coffee-drinking appears in the middle of the 15th century in the Sufi shrines of Yemen. It was here in Arabia that coffee seeds were first roasted and brewed in a similar way to how it is now prepared. Coffee seeds were first exported from East Africa to Yemen, as the coffea arabica plant is thought to have been indigenous to the former. Yemeni traders took coffee back to their homeland and began to cultivate the seed. By the 16th century, it had reached Persia, Turkey, and North Africa. From there, it spread to Europe and the rest of the world.The word "coffee" entered the English language in 1582 via the Dutch koffie, borrowed from the Ottoman Turkish kahve, in turn borrowed from the ArabicGah-wah . The Dutch East India Company (VOR) was the first to import coffee on a large scale. The Dutch later grew the crop in Jva and Ceylon The first exports of coffee from Java to the Netherlands occurred in 1711. Through the efforts of the British east India Company, coffee became popular in England as well. Oxford's Queen's Lane Coffee House, established in 1654, is still in existence today. Coffee was introduced in France in 1657, and in Austria and Poland after the 1683 Battle of Vienna when coffee was captured from supplies of the defeated Turks.  Coffee Trees are attractive with dark glossy leaves and striking red berries.  They take around seven years to mature and grow to about 5 metres but can be trimmed to two metres for easier harvest.  Coffee is relatively pest free and will grow well in rich or improved soils. Small white flowers appear two to four years after planting and produce a Jasmine-like fragrance. The flowers only last a few days then the green berries begin to appear, ripening and deepening to a bright red. Coffee grows best in semi-shade between around 15-25C
Livistona chinensis The Chinese Fan Palm is a beautiful solitary fan palm that will eventually reach 8 -12 meters. With lush fan shaped leaves, this is an absolutely stunning Palm that produces small cream colored flowers then large bunches of attractive blue fruit! Plants available approx 30-40cm tall! Livistona chinensis; the genus is named for the baron of Livingston. There are two subspecies; Livistona chinensis var. chinensis, China Southeast, and Vietnam. And Livistona chinensis var. subglobosa, Bermuda, Florida, Hawaii, Japan, Jawa, Marianas, Mauritius, Nansei-shoto, New Caledonia, La Réunion, and Taiwan.  Livistona chinensis was first described as Latania chinensis (Jacquin, 1801), from plants cultivated and subsequently naturalised in Mauritius and brought to Schoenbrunn Gardens, Vienna in 1788. It is lectotypified by the illustration in Jacquin (1801), Tab. 11, Fig. 1. The species name was taken from that used for the palm in Mauritius, “Latanier de la Chine”. Bretschneider (1898) provided some evidence to suggest that the naturalist and traveller Pierre Poivre was responsible for introducing the palm, during the mid 1700s, to Mauritius where it soon became naturalised. Poivre had made extensive collections of plants from southeast China and Indochina during the period 1740-1767. Martius (1838) provided the transfer to Livistona, based on Brown (1810) who suggested it should correctly have been in Livistona, but without formal transfer. For NW corner rainforest.

Spathiphyllum cochlearispathum is native to southern Mexico and often cultivated. The species was originally described by Frederik Liebmann in a separate genus Hydnostachyon, which he described as having a concave (spoon-like) spathe Spatha foliacea persistens cochleariformis, from which he formed the species epithet cochlearispathum. The species was moved to the genus Spathiphyllum by Heinrich Gustav Adolf Engler  Spathiphyllum  Certain species of Spathiphyllum are commonly known as Spath or peace lilies.
They are evergreen perennials with large leaves 12–65 cm long and 3–25 cm broad. The flowers are produced in a spadix, surrounded by a 10–30 cm long, white, yellowish, or greenish spathe. The plant does not need large amounts of light or water to survive. NW Rainforest area
Also yet to be desribed
Some new Bromeliads, Palms, Begonias, Hibiscus cuttings and a Dianthus/Carnation type to be identified.
Posted by "The Shambles" Montville garden at 3:33 PM No comments: