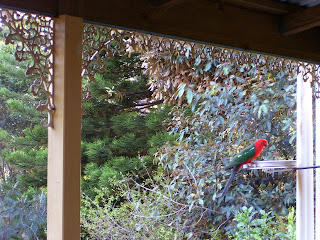 Toward the end of spring and with ongoing cool wet weather and a gentle start to summer some garden changes are in the pipe-line. Already Camellias, Azaleas and our hedges are being trimmed. Loropetalum chinense 'China Pink' which had completely blocked the light from our bedroom window, together with Goldfussia syn Strobilanthes , Azalea 'Exquisite' and Justicia carnea have been cut back severely. When Rhodomyrtus tomentosa, Grewia occidentalis and Tibouchina 'Noelene' stop flowering they will also be severly brought back in size.
These jobs relate to one small area of the garden but the same discipline has to be applied throughout. Mountains of trimmings result, but these 'turkey nests' break down to mulch over a period of time.
Drastic action is required in the north of the garden where one, possible two very large Cupressus are to be brought down to bring more light into the centre of the garden. Most will be mulched but some fire logs are sure to result. At the same time a very tall yellow Grevillea will be reduced by four or five meters and a Buckinghamia celcissima cut in half to reduce shade and reveal a beautiful Magnolia grandiflora which will eventually dominate the space.
We want to be able to have an unimpeded view of this Magnolia so a good few meters length of branches from a large Gordonia axillaris behind the house will be removed. Eventually the view to this Magnolia grandiflora from our back verandah will be framed by the white flowering Gordonia axillaris on one side , and the white flowering Camellia sasanqua 'Setsugekka' on the other.
It's not all subtraction at this time . New rose gardens, with pitching rock edges have been added either side of the front path to take cuttings grown old fashioned roses, 'Alexander Hill Gray', 'Mme Joseph Swartz', 'Etoile de Lyon', 'Perle des Jardins' and 3 specimens of a mysterious rose which resembles 'Homere'. We have also added Cleome including the new cultivar Cleome 'Senorita Rosalita' , Phaseolus giganteus on an arch at the opposite end of a path to an arch of Phaseolus caracalla.
Many other cuttings grown roses wait to be planted.
Flowering now is Galtonia, Zepharanthes rosea, Hellerborus x hybrids, Canna x generalia and Canna indica, Alstroemeria pulcellum and many other herbaceous plant and shrubs such as the Salvias and Budlejas.
We look forward to 2011 and will decide this week whether that means geing part of the 2011-2012 season of the Australian Open garden Scheme
Michael Simpson
Posted by "The Shambles" Montville garden at 9:54 PM No comments: 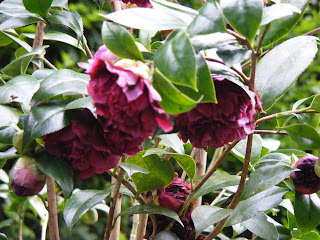 One of the opportunities which we have seized upon in 2010 is to make an effort to meet fellow gardeners through several open garden days, invited garden club visits, book launches, website/blog and welcoming private visitors.
Another side benefit of all this activity is that which flows to local groups, some less interested in Gardening, who have come together to join us at Open garden events. In June members of the Montville Rural Fire Brigade in full kit greeted visitors at the gate. In October members of the Hunchy Community Association not only created the fantastic Heritage Rose nursery (Kate Stock) Camellia 'Takanini' The Shambles
but created a wonderful plant stall, helped an the gate and for the Heritage Roses in Australia tour visit, helped prepare the catering. Thankfully each of these community groups benefitted significantly from funds raised in the garden. Our son John and daughter Eleanor, Margaret and Laurie Jeays, Kay Simpson friends and family also came together to work at these events.
At the invitation from Noel Burdette we were fortunate enough to speak to a large and enthusiastic garden group at the Springfields Nursery run by Ruth and Noel. Our book 'Over the Fence and Overlooked, Traditional Plants in Queensland's Gardening Heritage' and our DVD 'AGarden in the Rain' had opened the door to this opportunity and we hope that there are many more.
There are many ways to share a garden and the enthusiasm of gardening. Writing books, making films, publishing a website/blog, making postcards and opening the garden and sharing it have been enjoyable for us in 2010. Next year something else? The calendar is filling already.
Michael Simpson
Posted by "The Shambles" Montville garden at 7:25 PM No comments: