Yesterday I found myself back in Brisbane not for baby sitting but to help our daughter to do something with her garden. Thankfully when she first moved in to her Northern suburbs house we insisted on planting trees as a starting point to creating a more inviting place to go outside.
The main issue was the harsh western sun that would beat across the back of the house but now thanks to the trees there is a leafy view from the upper story windows as well as protection from the heat.
Often most of the stuff you need to do some garden renovation is actually just lying around the house, at least it was yesterday. A pile of shabby bricks , assorted pavers  and some pretty good mulch from a previous cutting back day.  All that was needed was a plan .
What we ended up doing was just making a series of stepping paves out of the assortment including some pretty weird zig zag ones.We moved plants that were struggling into new positions and also have the start of "Zen corner" purely because we decided to place a small tree( that came up by itself) in the centre of a meditative circle, though how much actual meditation could actually happen there is yet to be discovered. ( three children under 5) It is more likely to become a round about for push toys and that is fine too.
All of our paving has just been set into the ground and the garden beds have been created around them using the mulch and some plants that I brought down from home. The idea is just to see how it goes and to see if the kids like the idea of playing using the new paths as well as the swing set . The beauty of making a changeable garden is that it is not locked in and further down the track we will probably change the paths or do something completely different. I like the idea of children using their imaginations in play and having natural elements to utilise . A slide may be just a slide but rocks and dirt and stepping stones can lead you to a castle or a Zen round about if you want them to. 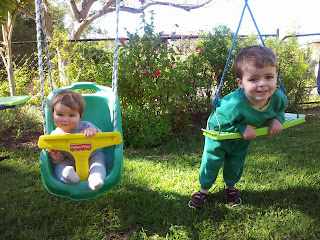 Posted by "The Shambles" Montville garden at 6:34 PM