Coming up, Christmas, Preparations for 'Easter in the Garden' Book Launches 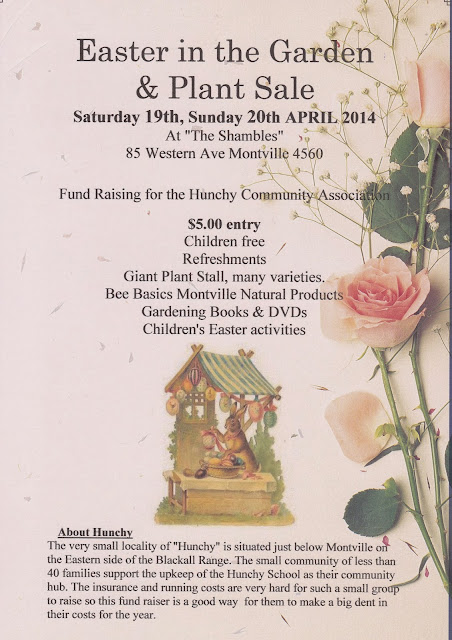 There has been a lot of work done around the old place since a pattern of showers and the odd storm have restored some moisture. "The Shambles" will be the venue for an Open garden and Giant plant stall on Easter Saturday and Easter Sunday 19th and 20th APRIL 2014.
In preparation there has been a lot of plant propagation done with many tempting unusual perennials on offer, with best prepared by Kate Stock at Hunchy. As in the past ther will also be an excellent range of cuttings grown Heritage Roses, Teas, Chinas and Climbers for sale.
The principle purpose of the Open garden and plant sale is to raise funds for the Hunchy Community Association , for their Hall insurance (the Old Hunchy School and grounds) and maintenance. These plant sales are a principal form of fundraising for the group and a great source of rarer, hard to find and unusual plants.

About Hunchy
The very small locality of "Hunchy" is situated just below Montville on the Eastern side of the Blackall Range. The small community of less than 40 families support the upkeep of the Hunchy School as their community hub. The insurance and running costs are very hard for such a small group to raise so this fund raiser is a good way  for them to make a big dent in their costs for the year.

In our own garden we have been so happy to see some newly acquired species get a great start. We are always nervous about planting juvenile specimens when rain is unreliable. We have no irrigation system.
Cracking on are
Plants collected Garden History trip October 2013-10-23

Rose "Monica of Omeo"  ROR, a gift from Darling Downs HRIA and Bonita Cattell.
This rose was found at Omeo, an old rose in a house lived in by longstanding resident Monica.  Red double, upright shrub.       Central Lawn and border

Scutellaria costaricana (scarlet skullcap) Royal Horticultural Society (Great Britain) 1864 "It is a native of Costa Rica and was introduced into Europe, we believe, by Mr. Wendland, to whom we are indebted for our living plants which flowered in a warm stove in 1863". Panama Costa Rica    East Garden
Ruellia elegans (Brazilian petunia) This species has open-faced coral-red blossoms from late spring until fall. a large native range from Chile to Brazil.  East garden
Brugmansia variegated. Apparently with pink flowers.      Blue trellis garden
Centratherum punctatum (Porcupine Flower) - A tender perennial to 1-2 feet tall by 2 feet wide with coarsely-toothed heavily-veined dark green leaves that smell of pineapple when crushed. The lavender button-like 1 1/2 inch wide flowers bloom from spring into summer.                                               Fenced Rose garden

Euphorbia cotinifolia is a broadleaf evergreen shrub native to Mexico and South America. Treated as a shrub it reaches 10 to 15 ft (3.0 to 4.6 m) but can be grown as a tree reaching 30 ft (9.1 m). Small white flowers with creamy bracts bloom at the ends of the branches in summer. The purplish stems, when broken, exude a sap that is a skin irritant                      South Rose Garden, Central Shrub garden

Gynura aurantiaca, Velvet Plant, Purple Velvet Plant. so called because of the color of its orange inflorescences. This plant is also commonly known as "Purple Passion" because of the velvety purple leaves Native to Java, velvet plant (also purple velvet plant) is a woody-based evergreen perennial that is noted for its velvety, purple-haired foliage. Indonesia       Orchid Walk
Posted by "The Shambles" Montville garden at 6:04 PM