The Shambles, After the Flood 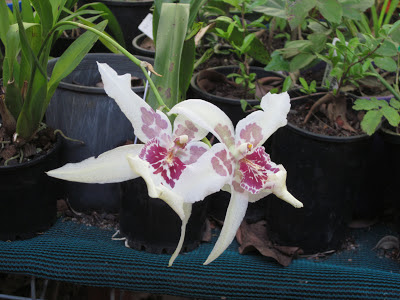 An orchid waiting for hanging in the new fernery.
After a record difficult dry spell all hell broke loose with record rain and damaging wind from ex-tropical cyclone Oswald on the Australia day weekend. Terrible floods affected many centres and in our area at Montville there was damage around us with no power, phone or mobile phone for 4 days as a result.
Thankfully our home and garden was largely unscathed except for some flooding in the "The Inn".
Also thanks to Martin Leonard who came up on the following weekend for hedge trimming aand removal of much material to the tip.
A couple of weeks later the effects of the rain have been miraculous. All of the roses and perennials which had been flowerless and 'on hold' in the dry are now bursting with new growth and flower bud. We took the opportunity to plant more mature specimens which had been held over such as Magnolia soulangiana, Rhododendron indica 'Splendens', Viburnum suspensum and on our front embankment Nerium oleander 'Dwarf Apricot'.
We are revisiting an attempt to grow Hemizygia transvaalensis in a stone wall raised garden bed largely in shade and have planted out precious little roses such as Rosa chinensis sempreflorens and a cream tea rose from Nicky Booth in Woodford we style 'Mrs Cannons Woodford Rose'.
The new fernery with its raised stone edge beds, collections of ferns and orhcids has had a great start and looks like has been there for a long time. The final construction around the 'Fernery and Fungary' and our propagation area will probably happen this week.
To prevent flooding in the "Plough Inn" again we have installed corrugated iron lined garden beds and rearranged other stone edge garden beds to divert the flow of rain run-off from the hill in front of this building. We are not sure about the role of the resulting garden beds about 5 meters in length and in shade should be. I favour perhaps a collection of begonias, or maybe low growing fern allies.
We'll see.
Michael Simpson
Posted by "The Shambles" Montville garden at 1:47 PM